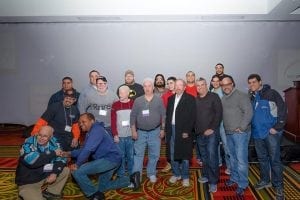 The HPS Brotherhood – a group of men who are supporting or caring for a loved one with HPS – met for the second time at the 24th Annual HPS Network Conference. “We had 18 men there. They were husbands, brothers, boyfriends, sons – it doesn’t matter. It was just great to have such a good turnout of men looking for a way to get involved and support someone with HPS,” said Anthony Creer, founder of the HPS Brotherhood.

The group agreed to set the goal of raising the nearly $20,000 it takes to host the HPS Conference Saturday night dinner in 2018. “We want the Network to spend that money on something else next year, like bringing doctors to the Meeting of the Minds research meeting, or funding research,” said Creer, “If each of us there raises $1,000 in the next year, we can meet that goal.” To kick off the year, the group passed the hat among themselves and raised $301.

Creer founded the HPS Brotherhood last year out of recognition that men support each other differently than women. He wanted to create a space where men could get to know each other, help one another, and get involved in the HPS community to be a part of the solution.

If you are interested in being a part of the HPS Brotherhood, message Anthony Creer on Facebook, or call him at: (813) 373-3294.  If you’d like to make a donation to support the Brotherhood’s 2018 conference goal, Creer asks that you make the check out to the HPS Network and put Brotherhood in the memo line. Donations can be sent to: HPS Network, One South Road, Oyster Bay, NY 11771.