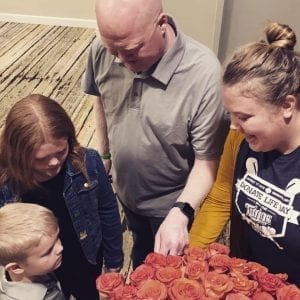 Steve Shank, who received a double lung transplant two years ago, will be riding the Gift of Life Rose Parade float on New Year’s Day. He and his family are in Pasadena several days early to participate in pre-parade activities including getting to help decorate the float with 25,000 colorful roses.

If you’d like to keep your eyes peeled for Steve while watching the Parade New Year’s Day, the float is titled Rhythm of the Heart and will have an African mask and drum theme. It is float number 16. The parade begins at 11:00 am ET. Networks that will broadcast the parade include: ABC, NBC, The Hallmark Channel, Univision, RFDTV and the Armed Forces