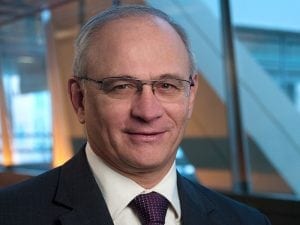 Dr. William Gahl, Clinical Director of the National Human Genome Research Institute, Head of the Undiagnosed Diseases Program and Senior Investigator, Medical Genetics Branch at the National Institutes of Health, was awarded the Lifetime Achievement Award by the Hermansky-Pudlak Syndrome Network at its 25th annual conference in March, 2018.

Dr. Gahl started clinical research into HPS at the NIH back in the early 90s by first studying Ashley Appell, the index case for HPS. He then opened the Natural History Study of HPS to begin to understand how HPS symptoms developed over the course of a lifetime. Using data from this study, he opened a phase II clinical trial to study the use of Pirfenidone (Esbriet) to treat the pulmonary fibrosis of HPS in 1998. Later he opened a phase III study for Pirfenidone. His lab identified three of the 10 known genes to cause HPS.

Dr. Gahl has attended every HPS conference since the first conferences held in the Appell home. He and his lab have seen more HPS patients than anywhere else in the world at the NIH Clinical Center.

“We have been so blessed to have an investigator like Dr. Gahl in our corner all of these years,” says Donna Appell, Executive Director and Founder of the HPS Network, “I don’t know where we would be today without his dedication, insight, intellect and kindness.”

Dr. William A. Gahl earned his B.S. in biology from the Massachusetts Institute of Technology in 1972 and his M.D. from the University of Wisconsin in 1976. He obtained a Ph.D. degree in oncology research from Wisconsin’s McArdle Laboratories for Cancer Research in 1981 and served as pediatric resident and chief resident at the University of Wisconsin hospitals from 1976-80. In 1984, he completed clinical genetics and clinical biochemical genetics fellowships at the NIH’s Interinstitute Medical Genetics Training Program, which he directed from 1989 to 1994. Dr. Gahl’s research has focused on the natural history of rare metabolic disorders and the discovery of new genetic diseases. He elucidated the basic defects in cystinosis and Salla disease, i.e., deficiencies of the lysosomal membrane transporters that carry cystine and sialic acid, respectively, out of the lysosome.

Dr. Gahl also demonstrated effective therapy for nephropathic cystinosis, bringing cysteamine to new drug approval by the Food and Drug Administration. His group described the natural history of Lowe syndrome, alkaptonuria, autosomal recessive polycystic kidney disease, Chediak-Higashi disease, GNE myopathy, and Hermansky-Pudlak syndrome (HPS), a disorder of oculocutaneous albinism, bleeding, and pulmonary fibrosis. His lab discovered the genetic bases of gray platelet syndrome, Hartnup disease, arterial calcification due to deficiency of CD73, 3-methylglutaconic aciduria type III, and neutropenia due to VPS45 deficiency. He has published more than 350 peer-reviewed papers and trained 36 biochemical geneticists. He established American Board of Medical Specialties certification for medical biochemical genetics. He served one the board of directors of the ABMG, as president of the Society for Inherited Metabolic Disorders, and was elected to the American Society for Clinical Investigation and the Association of American Physicians.

Dr. Gahl received the Dr. Nathan Davis Award for Outstanding Government Service from the AMA, the Service to America Medal in Science and the Environment, and numerous other awards.